Zumtobel accentuates the magical atmosphere of the Elbe Philharmonic Hall in Hamburg, incorporating a tailored lighting solution that uniquely brings the heart of this spectacular concert hall to life.

The building, designed by Swiss architects Herzog & de Meuron, stands directly next to the River Elbe on more than 1000 reinforced concrete posts. The architectural concept blends old and new, with a spectacular marquee-like glass structure mounted on top of a former warehouse with a brick-facade. The building houses a philharmonic orchestra, a hotel, dining facilities, apartments and the Plaza viewing platform. As a key member of the project team involved in the construction of the Elbphilharmonie, Zumtobel has helped to realise a series of lighting solutions within the building. 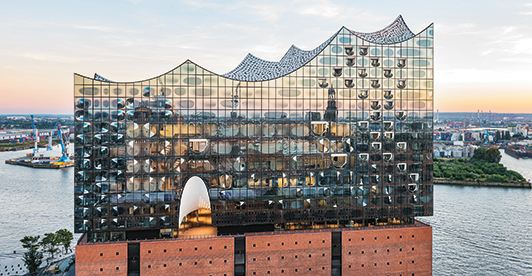 The customised lighting solution for general illumination in the concert hall is particularly impressive. Zumtobel has referenced the architectural philosophy of combining old and new by working closely with Herzog & de Meuron, lighting design firm Ulrike Brandi Licht and the glass designer Detlef Tanz from Wegberg to carefully craft 1200 hand-blown glass ball luminaires. Paying homage to the nearby River Elbe, the fittings appear like light-filled water bubbles emerging from the undulating acoustic ceiling, in which the luminaire housings are discretely concealed from view. The combination of traditional craftsmanship and modern LED technology made the development of this lighting solution a special challenge for Zumtobel. The result is a custom-made luminaire with an especially attractive appearance, which uses a colour temperature of 2700 K to create an emotive atmosphere in the room. The ball fittings are seamlessly dimmable via DMX controls and fully compatible with HDTV, meaning that video recordings made in the concert hall are completely flicker-free. A third of the luminaires are also integrated into the emergency lighting system. 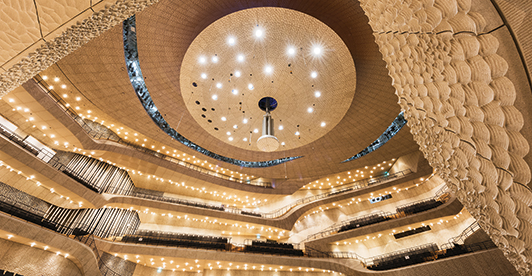 The Plaza features a further 870 machine-made plastic ball luminaires. These LED solutions are grouped in diamond shapes and provide pleasant warm-white general illumination with a colour temperature of 3000 K. Some of the fittings are linked to the emergency lighting network and the whole installation can be seamlessly dimmed with DALI controls.

Zumtobel developed another customised luminaire specifically for the foyer and the cloakroom in front of the concert hall. This hybrid product incorporates a hand-crafted fluorescent fitting with an RGB LED module, which can be separately controlled using a DALI interface. While the conventional fluorescent lamp is used for general lighting, the RGB LED module can be regulated to deliver the right colour for the right mood. Depending on the particular event, this means that the 750 luminaires can be individually adjusted to create poignant effect lighting. A proportion of the fluorescent lamps additionally perform an emergency lighting function. 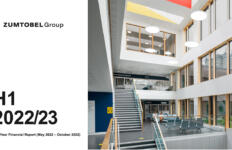 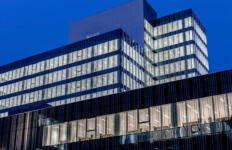