«Our comparable sales growth improved in comparison to previous quarters, driven by double-digit growth in our business groups LED and Home and a return to growth in Europe and the Rest of the World, despite ongoing challenging conditions in some markets. We continued to increase our operational profitability and free cash flow compared to the first quarter of last year, demonstrating the rigorous implementation of our strategy,» said CEO Eric Rondolat.

«These results reinforce our confidence that the company is well positioned to achieve its 2017 outlook and medium term goals.»

We are on track to further improve our Adjusted EBITA margin by approximately 50-100 basis points in 2017, in line with our medium term outlook to gradually improve the Adjusted EBITA margin to 11-13%, and to deliver solid free cash flow. While we remain cautious given global economic uncertainty, we are committed to our ambition to return to positive comparable sales growth in the course of this year. 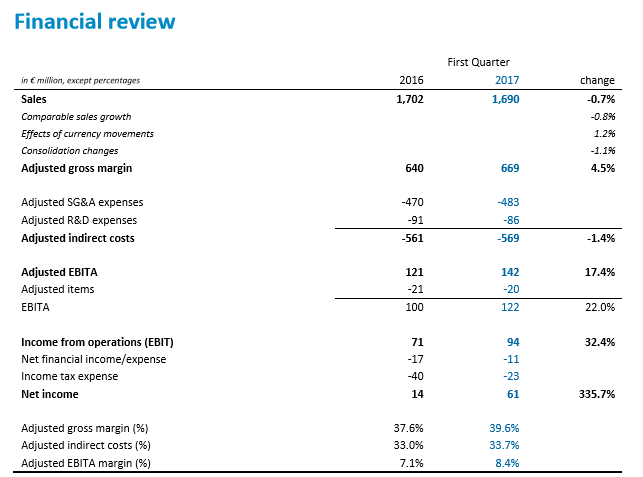 Sales amounted to EUR 1,690 million. On a comparable basis, the decline in sales slowed to -0.8%, an improvement compared to previous quarters. Europe and the Rest of the World delivered growth, while the Americas was impacted by an accelerated decline in conventional lighting and softer market conditions. Business groups LED and Home achieved double-digit growth, driving total LED-based sales growth of 19%. Total LED based-sales now represent 61% of total sales.  Adjusted gross margin amounted to EUR 669 million. As a percentage of sales, adjusted gross margin improved by 200 basis points to 39.6%, largely driven by procurement savings and currency impact, partly offset by price erosion. Adjusted indirect costs increased by EUR 8 million, to EUR 569 million, primarily due to currency impact and an additional month of the brand license fee in the quarter, while last year included a pension gain. Adjusted EBITA increased to EUR 142 million, resulting in a 130 basis point improvement of the Adjusted EBITA margin to 8.4%. Restructuring and incidental items amounted to EUR 20 million. Restructuring costs were EUR 10 million, while incidental items included a charge of EUR 9 million in separation costs.  Net income increased from EUR 14 million to EUR 61 million, driven by improved operational profitability and a decrease of both financial and income tax expenses. Financial expenses in the first quarter of last year were impacted by higher foreign currency exchange rate losses. The decrease in income tax expenses was primarily due to non-recurring tax charges related to the separation from Royal Philips last year.

Professional: The Philips Lightpole Site Slim, a new connected street light for Europe, was introduced with Ericsson. It offers cities the benefit of both energy-efficient LED lighting and high-speed LTE/4G broadband connectivity, without cluttering the cityscape. The offering helps to capture adjacent value through new Services business models.   

Professional: Continuing our leadership in Systems and Services, Philips CityTouch added over 80 projects in the first quarter, bringing the total number of installations to 852 projects in 37 countries since 2012. Philips CityTouch allows municipalities to monitor, manage and measure their connected street lighting infrastructure through simple web applications and can help reduce energy consumption by up to 70%. 

Home: The Philips Hue white and color ambiance candle light bulb was introduced, strengthening Philips Hue’s position as the most extensive connected home lighting system. The candle, available in Europe by end April and in North America later this year, means Philips Hue can be used in over 80% of light sockets in households around the world. 

Home: The new portable outdoor light, Philips Abelia LED lantern, was introduced as part of the company’s continuous innovation in LED products. The introduction comes as consumers are increasingly looking for versatile outdoor lighting options, especially in urban places, where space is at a premium.

First quarter Sales amounted to EUR 621 million, an increase of 2.5% on a comparable basis. Europe and the Rest of the World showed growth. The Americas had a soft start, but the order backlog improved during the quarter. Adjusted EBITA increased by EUR 7 million to EUR 13 million. The Adjusted EBITA margin increased by 110 basis points to 2.1%. Excluding the impact of incidentals, most notably the EUR 12 million gain on the sale of receivables in 2016, the year-on-year margin improvement was 280 basis points. Procurement savings, production efficiency improvements and mix improvement were partly offset by write-downs on bad debt in Saudi Arabia, although to a lesser extent than experienced in previous quarters.

Sales in the first quarter increased to EUR 148 million as comparable sales grew by 20.6%, primarily driven by the Home Systems business. All market groups contributed to growth. At EUR 3 million, Adjusted EBITA turned Page: 5 positive in the first three months of the year, showing the benefits of sales growth and cost reduction actions taken in 2016. The Adjusted EBITA margin improved from -9.7% last year to a positive 2.0%. The performance of Home illustrates the success of our connected lighting systems strategy.

adjusted EBITA decreased to EUR -27 million in the quarter (Q1 2016: EUR -18 million). The decrease of EUR 9 million can primarily be explained by a pension gain in the first quarter last year and additional expenses to support innovation in the first quarter of this year. Adjusted EBITA represents amounts not allocated to the operating segments and is mainly comprised of certain costs related to group enabling functions and activities to drive innovation. EBITA amounted to EUR -38 million (Q1 2016: EUR -21 million), including a charge of EUR 9 million for separation costs (Q1 2016: EUR 2 million).

Net debt amounted to EUR 416 million, an increase of EUR 75 million. Net debt was impacted by EUR 82 million due to our participation in the share disposal by our main shareholder in February. The acquired 3.5 million shares will be cancelled in the course of the second quarter. As a consequence, the cash position decreased to EUR 935 million. Total equity decreased to EUR 2,746 million at the end of the first quarter (Q4 2016: EUR 2,808 million), primarily due to the share purchase and currency translation result, partly offset by positive net income. Total equity minus net debt amounted to EUR 2,330 million 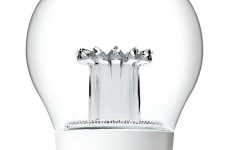 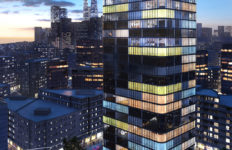 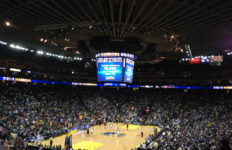