“Lighting Science’s groundbreaking LED indoor grow lighting positions them as a leader in their field and the perfect collaborative partner for the Lowline LAB,” said James Ramsey, inventor of the Lowline and principal of Raad Studio.

HOW TO GROW PLANTS UNDERGROUND

Fueled by their shared passion for pushing the boundaries of design and technology, Lighting Science worked with the Lowline Lab last year to develop, donate and install 24 adjustable LED lights into the 1000-square-foot aluminum canopy suspended above the earthy installation at the Lowline Lab. Each hexagonal panel is roughly 2 feet in diameter and features three settings: one that provides soft-white light, one that mimics daylight, and one that includes Lighting Science’s patented VividGro™ LED indoor grow light spectrum technology.

Tailored to the indoor agriculture and horticultural markets, VividGro’s patented light spectrum has been proven to increase plant yields by up to 30 percent, increase the nutritional density of crops by approximately 10-12 percent and decrease energy consumption by up to 45 percent or more.

“It’s wonderful getting involved with a group of passionate people to do something new and of great value,” said Fred Maxik, founder and chief technology officer of Lighting Science and inventor of VividGro. “Our job, fitting light into novel forms and functions, complements their amazing vision of bringing closed urban environments to vivid life with light.”

Teeming with more than 3500 plants, the 1,000-square-foot Lab installation also uses experimental technology that harnesses the power of natural sunlight through funnel-like solar installations that magnify and direct beams of sunlight to the underground plant life.

By combining the power of VividGro LED panels and the Lowline Lab’s “Remote Skylight” technology, co-founders James Ramsey and Dan Barasch found that even on the darkest winter day, they were able to achieve the right light intensity, duration and spectrum necessary for a wide range of flowers, plants, fruits and vegetables to thrive.

“You know you’re onto something when you can grow pineapples and tomatoes during a New York winter underground,” said Ramsey. 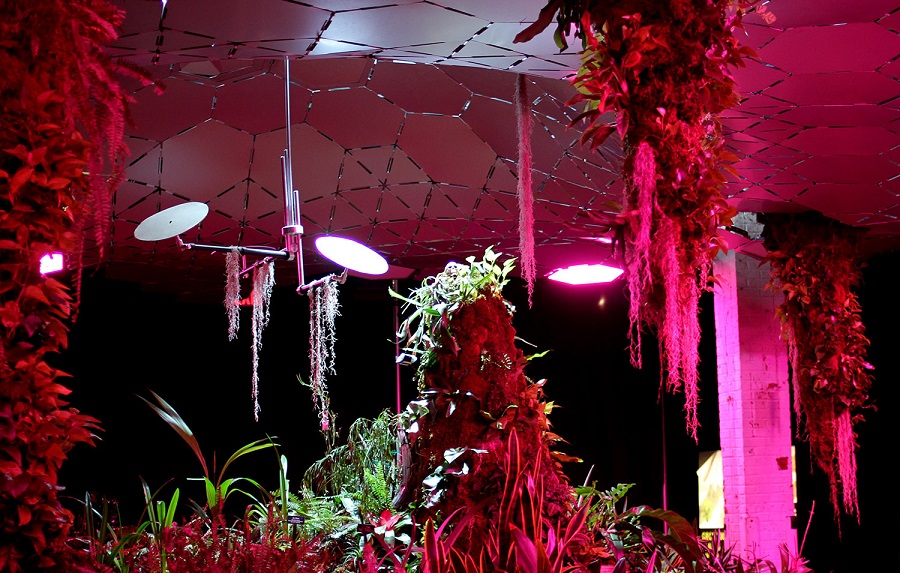 REIMAGINING URBAN SPACES: ABOUT THE LOWLINE

The Lowline Lab, which has been thriving for the past year, has sparked conversations about new ways that cities and communities around the world can reclaim abandoned urban spaces. By discovering how to create a sustainable environment for a subterranean ecosystem, the Lowline is developing new solutions for providing city dwellers with four-season public space.

Set to open in 2021, the Lowline will be the world’s first underground park, one New York Magazine called “the most exciting civic project since The Highline.” The brainchild of designer James Ramsey and Dan Barasch, the 40,000 square foot Lowline will be an underground park where a diverse range of flora and fauna will experience natural photosynthesis without direct access to sunlight. In addition to creating new avenues for public space, the team hopes The Lowline will provide new technology solutions for indoor agriculture and sustainably-grown local food production.

The Lowline was approved by the City of New York in August, and urban leaders around the world are waiting and watching the Lowline team attempt to transform an abandoned historic underground trolley terminal on the Lower East Side of New York City into a botanical garden and cultural attraction in one of the world’s densest urban environments. In addition to Lighting Science, The Lowline is also working in partnership with international engineering firm Arup, architecture firm RAAD, and renowned landscape architecture firm Matthew Nielsen and horticulturalists John Mini Distinctive Landscapes.