On April 5, 2017, The Wall Street Journal wrote that General Electric (GE) could sell its consumer light bulb business. GE’s consumer lighting business played a vital role in shaping its identity in the past. The proceeds of the sale are expected to be 500 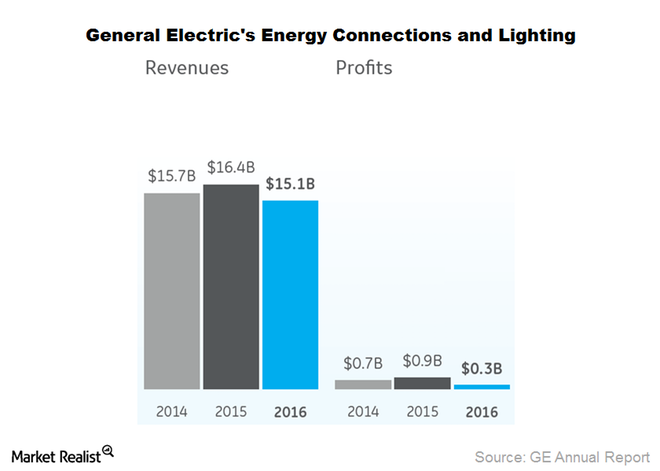 While discussing its business prospects in its 2016 annual report, General Electric cited soft demand in the North American and European electrical distribution markets. Plus, opportunities in the LED (light-emitting diode) space are also driving a technological shift away from traditional lighting products.

The consumer lighting business (PHG) pales in comparison to the rest of GE’s revenue repertoire. Remember, today’s GE has opted for rationality over pride by letting go the iconic business that shaped its identity. This divestiture marks GE’s reliance on its core strategy of moving away from commodity products.

General Electric’s Energy Connections and Lighting segment includes grid management solutions, power conversion technologies, and lighting and energy-efficient solutions. Revenue-wise, the segment reported a fall of ~8% in 2016 to close at $15.1 billion. The consumer lighting business is part of the Energy Connections and Lighting segment, and it’s expected to realize $500.0 million upon its being sold.

GE’s divestitures in the past

In the past, GE divested a few of its financial services to Wells Fargo (WFC). The company also separated its consumer credit unit, converting it into Synchrony Finance. It sold its appliances business was sold in June 2016, and at the end of 2016, GE shook the oil and gas sector by combining its oil and gas (UNG) business vertical with that of Baker Hughes (BHI).